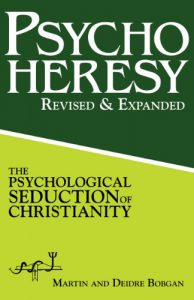 Twenty-five years ago, after being rejected for publication by three publishers of our former books, as well as by other publishers, we published our PsychoHeresy manuscript. We chose the subtitle The Psychological Seduction of Christianity because even then we could see the leading edge of a psychological tsunami that during the past twenty-five years has almost entirely engulfed the church.

After these twenty-five years of PsychoHeresy, an enigma exists over the fact that on the one hand the current research more strongly supports our original conclusions and concerns, but on the other hand psychoheresy is more deeply and broadly imbedded throughout the church.

PsychoHeresy demonstrates the fact that psychological explanations about life and psychological solutions to life’s problems are questionable at best, detrimental at worst, and spiritual counterfeits at least.

Just as with all of our other books still in-print, this revised and expanded edition of PsychoHeresy will be available on our web site as a free pdf ebook to be read on line or downloaded and printed. The online edition is the same word for word as the printed edition and is thus available world-wide. Our web site has over one thousand visitors a day and is visited by individuals in over 110 different countries throughout the world each month.

We ask for the prayers and financial support of those of you who are like-minded to get this message out to all believers who value the sufficiency of Scripture for the issues of life normally taken to a psychotherapist.

Sign up today to receive new Psychoheresy Awareness articles, PsychNotes, and other items of interest.

Your privacy is important to us. Your information will not be shared, and you can unsubscribe at any time.

Sign up today to receive new Psychoheresy Awareness articles, PsychNotes, and other items of interest.

Your privacy is important to us. Your information will not be shared, and you can unsubscribe at any time.